From Chains to Wings: The A21 Campaign

1. Tell us a bit more about The A21 Campaign’s mission?

The A21 Campaign (A21) is a global counter trafficking organization that is based in 7 countries worldwide. We focus our efforts on abolishing injustice specifically focused on human slavery. In order to achieve our goals in counter trafficking we operate within a 4-prong strategy that has been adapted from the The UN’s Palermo Protocol:

• Prevention: through awareness and education, equipping those identified as vulnerable people, with the tools they need to avoid becoming a victim of human trafficking

• Prosecution: our legal team and affiliated legal organizations work together to prosecute traffickers to strengthen the overall legal response to human trafficking in each country we operate in. In Greece we have had more than 11 convictions in court in 2012 alone.

• Partnering: with key stakeholders and role players in counter trafficking efforts, government and community members to provide a united approach to combatting trafficking and providing comprehensive care for survivors. In Greece we worked with local police authorities to set up a task team to investigate human trafficking cases and conduct rescues.

2. What are the statistics of human trafficking and the combating thereof?

27 Million The number of people in slavery globally. This means that there are more slaves in the world today than when it was socially acceptable and the slave trade was LEGAL in the 18th Century

32 billion What the slave trade grosses every year- more than McDonalds, Walmart and Coca Cola combined

100 This is the number of times one of the survivors in our shelters had to service men per day. In some circumstances those in the sex trade industry are servicing between 40-100 per day. Other realities of a victim- working 7 days a week, one meal a day, no pay, threats of violence to them and their families, forcibly addicted to drugs, no freedom, may not speak the language, forced abortions, babies given to infant farms to supply the demand for child slaves.

12 The average age of a trafficked victim.

1 Less than 1% of those caught in human trafficking, trapped in slavery will ever be rescued. 99% of those who are enslaved will not make it out alive.

24 The number of victims that have been assisted in transition by A21 South Africa since May 2013.

3. What can be done to solve this big human trafficking issue?

Human trafficking is a complex issue that requires a proportionate response from government, para-government agencies, NGOs, and civil society alike. While we would all like to believe that there is an easy answer to this injustice, the truth is that human trafficking is an ever-evolving crime that likewise requires evolving approaches from all role players.

While this may seem like a discouraging answer, we at The A21 Campaign are compelled to action with this in the back of our mind. We believe that through creativity, ingenuity, and comprehensive strategy in our four areas of prevention, protection, prosecution, and partnership, we will see injustice abolished in our lifetime.

It is more important than ever that you as a reader understand that you have the capacity to contend for the cause of justice in your sphere of influence. Whether you are an educator, a student, a corporate executive, or a stay at home mother, you have the ability to use what you have where you are to change history. We challenge you to get informed and get involved. Educate yourself through local news sources, published legislation, or by following organizations like The A21 Campaign on social media or through a subscription to our newsletter. Get involved by submitting an inquiry through www.thea21campaign.org , joining your area human trafficking task team, starting an abolitionist group in your church, school, community group, etc. or in some other way! Alone we cannot do everything, but we can all do something.

When we all link arms in our commitment to justice, we will see slavery abolished in the 21st century.

As a campaign we have been operational since 2008, and in that time we have planted in 9 countries. The unprecedented success in our first five years of operation is due largely to our commitment to partnership with governments, para-government agencies, and NGOs alike. Furthermore, our development staff on the ground in these countries have committed themselves to in-depth research to tailor A21’s various programs to the needs of the countries that we operate in. This approach has proven wildly successful both quantitatively and qualitatively.

Some of A21’s achievements in the past 4 years include:

Greece: Pioneering a Human Trafficking hotline that in its first year of operation led to 11 rescues. A21 has been acknowledged as a Hero organization in the Trafficking in Person’s report (TIP). Phillip Hyldgaard, our European Coordinator, was honored by Hilary Clinton for this achievement.

Bulgaria: A21 has been acknowledged as an official partner with the Bulgarian Government in strategies for combatting human trafficking in Bulgaria.

Ukraine: In November 2012 one of the survivors in A21’s care was the first official victim of human trafficking under new Ukrainian legislation.

UK: Is pioneering awareness programs for school age children, to protect them against this atrocity, as well as to inspire them into social action.

USA: Has seen the state of Georgia adopt A21’s School Awareness Program as official curriculum for all schools. A21 has also trained human trafficking task teams and law enforcement on strategies in combatting trafficking and how to screen for victims.

Australia: Is our head office and coordinates all strategic planning, along with school presentations rallying students on the importance of standing up for a cause and taking responsibility for what is going on around them.

South Africa: Has been operational since March 2013, we are currently leading the Rapid Response team in Western Cape, working together with law enforcement to place victims in safe care and respond to their immediate physical, emotional, and medical needs once they are identified. In June 2013 A21 represented Western Cape with 2 other NGO’s at the National Strategic Planning seminar, working with national government on the national strategic plan for effective implementation of the TIP Bill that was passed in July 2013.

5. How can the general public help?

The A21 Campaign has a number of areas to get involved. Those interested in spreading awareness about human trafficking can visit our website at www.theA21campaign.org

If you would like to volunteer with The A21 Campaign South Africa, please email This email address is being protected from spambots. You need JavaScript enabled to view it. or follow us on social media to learn about specific opportunities to partner. 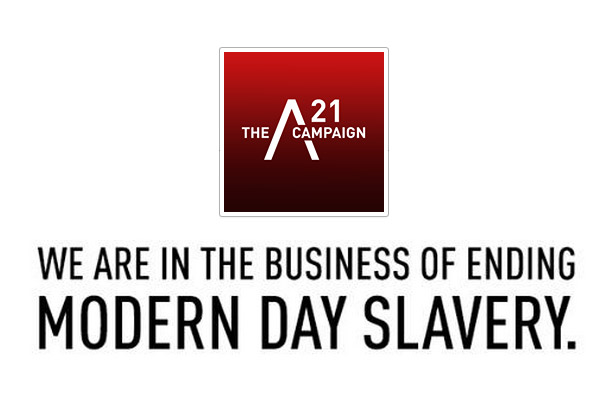 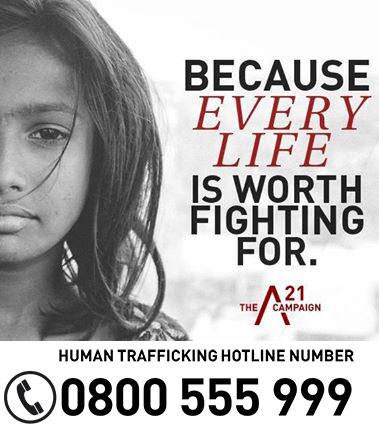