1. What is the story behind Shama?

The story behind Shama is the heart of a Bridegroom who desires a covenant people, a royal priesthood and a holy nation. Abba took me into a desert season in my life where I started to ask the question, what is the heart of a walk with God really about? On my Exodus journey of humbling and purification the word of Abba came to me. It was not in the form of a burning bush but it was the whispers of Wisdom Himself saying that I needed to go to Israel because He will answer my question there. He truly did part the water to get me there. I waited and I listened until that day when I was in a garden in Jerusalem. Father spoke to me so very clearly there saying that a walk with Him is about listening and obeying because as you listen and obey, as you hear and do, you make your way back to the garden of what He originally purposed for His children. That garden is called a covenant relationship. Shama was birthed out of a place where I asked God, how do we walk in the fullness of Your purposes? How do we possess the Promised Land? How do we receive the full inheritance that He purposed for us and how do we become His bride that stand ready for His return? How should we as believers live Kingdom on earth? In that garden He revealed to me that He wanted me to write a book but it would not be my book, it would be His book because the words in it will be the whispers of Wisdom revealing His truth to His bride that is awakened and who wants to walk in intimacy with Him. He said that the purpose of the book is to lead people into the promised land of intimacy with Him, which is something that we greatly lack and struggle within our relationship with Him. I carried the commission from the heart of Jerusalem to South Africa where I spent 3 months writing down everything that He revealed. I know that it is His wisdom and truth that flowed through my pen and nothing that I could’ve written by myself because I could feel the anointing as I wrote it down. There were many tears as I was overwhelmed by the richness of the words and the desire of our heavenly Bridegroom for a bride that give herself, her lifestyle to walk according to His ancient ways in her pursuit to posses the fullness of His presence and be transformed into His image. Through the pages of Shama He reveals that He wants to transform our lifestyles into a walk of listening and obeying.

2. Why is the Shama message so important?

The Shama message is crucially important because the church has fallen into a comfort zone of religion where compromise became the principle that most Christians walk in. We have moved far from His ancient paths because we have become distracted by the form of religion instead of focusing on the heart of what Christianity is actually really about- intimacy with God. Shama is so crucially important because the majority of Christians are fruitless. The principle of Shama which is listening and obeying or hearing and doing is the very principle that breaks the spirit of religion. Religion stays in a comfort zone where Shama walks in the Word. Religion is a fruitless tree but Shama brings you back to the garden of fruitfulness. Religion is dead but listening and obeying makes the dry bones alive where breath enters into it and they come alive. When you stay behind the veil of religion you will remain lukewarm because you do not walk in the Word and with the Spirit. We may have His Word on our lips, we may have knowledge about the Word and we may perform miracles by His Spirit, delivering the possessed, casting out demons and healings may even take place but you will still come before Him and you will still not be recognized as His bride because you have no fruit and you are veiled. If you do not live the principle of Shama through listening and obeying then you never walk in the Word and you never live it. Your Christian works and your church life ends up meaning nothing and you will be weighed and found too light because we were never called for religion, we were purposed to walk with Him in a covenant relationship.

We all believe that the greatest commandment is to love the Lord our God with all of our hearts, soul and strength and our neighbor as ourselves but if we look at the original Biblical text it sounds a bit different.

The original Hebrew word in the Scripture begins with Shama (or Shema) Yisrael and then it continues to say that we should love the Lord our God and our neighbor as ourselves. This Scripture is the answer that Messiah gives when He is asked what is the greatest commandment. The greatest commandment is not to love God and your neighbor as yourself. It is firstly to LISTEN and OBEY because the fruit of listening and obeying is LOVE. For how can we love Him if we do not obey Him? Loving God cannot be separated from obeying Him. Therefore the principle of Shama teaches you to walk with God; it is practical and life changing because it transforms your lifestyle from revolving around yourself and the things of this world to revolving around the true Word and conforming to His desires.

3. What is God speaking to the church right now?

This question makes me very excited because I know that when we really hear what He is saying and walk in it then we will see revival in a way that we have never seen before. Therefore listen closely to what I am going to say now because this is not my words but what Abba has revealed through His Spirit for those who want to listen. He is saying to you and me that He wants us to hear, He wants to circumcise our ears to prepare us to hear the sound of the trumpet which is the sound that will be heard as He gathers His bride, His army for a war and a wedding feast. That is what we are moving towards and what He wants us to hear in this time is how to get ready for it. The time that we are in now is a time of restoration; Abba wants to restore us to a covenant relationship with Him. He wants to restore us to a position of walking in His ancient paths. He wants to rebuild the old waste places of religion and legalism in our lives and rise up a nation that lives Kingdom on earth. He is saying to you and me now that we desperately need to break free from religion and pass over into a covenant relationship with Him. He spoke to me about what the Garden of Eden in the beginning is really about and said that there was a first Adam and there was a last Adam. The First Adam disobeyed because He did not walk in His order and therefore He was removed from the garden of intimacy with God. There was a first Eve but now is the time that the last Eve which is the true bride of Christ need to return to the garden of dwelling with God. It is time to go back to Eden. It is time to return to the Rock of Ages because the Lion of Judah is roaring: ‘I AM COMING.’ May He not find a people sleeping because of a state of religion. May He find a bride, ready, spotless, prepared who is restored to His garden, who is called the last Eve.

4. Tell us a bit about the cd launched recently?

When Abba gave the word that I needed to go to Israel He gave me 7 songs and He said: ‘Go to Zion with singing.’ I had to release the 7 songs in Israel at different places that He showed me. I had to literally plant the 7 pages of the songs in the soil of the Promised Land pouring anointing oil over it as if I was planting a seed. He revealed that the message of Shama will turn people’s deserts into a garden and that it will transform you into a tree bearing much fruit. He continued to speak and He said that there is a sound in His garden; it is the sound of a garden in the time of blossoming. That sound is the 7 Songs that He gave saying that the revelation about it is hidden in the pages of the Song of Songs. He is pouring out a new oil over His bride and it is called BLOSSOMING. The blossoming oil flows out of the fruit of covenant love with our Heavenly Bridegroom. He is saying that we need to hear the sound and the song of the Bridegroom so that we can be like the Shulamite bride in Song of Solomon. Song of Solomon is the one book in the Word that reveals to us Father’s true heart of intimacy. For us to be restored to His garden we need to abide in the Song of Songs. Each one of the 7 songs take you deeper into a covenant relationship with your Heavenly Husband and gives you a deeper understanding about how to prepare yourself for the Marriage supper of the Lamb. There is really a lot to share about this exciting revelation in these 7 songs but if I can sum it up by saying the purpose of each of them is- TO HEAR! Because when we hear, it will lead us into listening and when we listen it will lead us into obeying and when we obey we abide in a covenant relationship with Messiah which is the purpose of life. Each of the 7 songs carries the anointing of awakening your ears and your heart to your First Love.

5. What would you like to tell the world through the message of this ministry?

Wake up, because there is so much more to a relationship with God than what we have known. We are so used to putting God in the box of religion that we grieve His Spirit and we end up walking in circles in the desert when we were called to posses the Promised Land. We have become comfortable with dwelling in the desert and we have compromised so much that we live as though it is all there is. My greatest desire is just to obey my First Love, my Messiah through speaking the words that He puts in my mouth and releasing the sound of the trumpet alarm so that there can be great awakening. We need to be careful not to think that we are in the light but then we are actually in the darkness. There is no place in the bride of Christ for lukewarmness. I would like people to hear the true heart of Abba and return to it. I would like people to receive true revelation and understanding through the word that Abba gives so that they can move deeper into intimacy with Him. I would like people to take their eyes off of people, off of themselves, off of their teachers and pastors, off of organizations, systems, off of sugar coated messages and turn their eyes to behold the Bridegroom. To hear what He says and see what He shows because it is all about Him.

If you'd like to order any products from this ministry please contact them directly via links on right hand side of this page. Thank you. 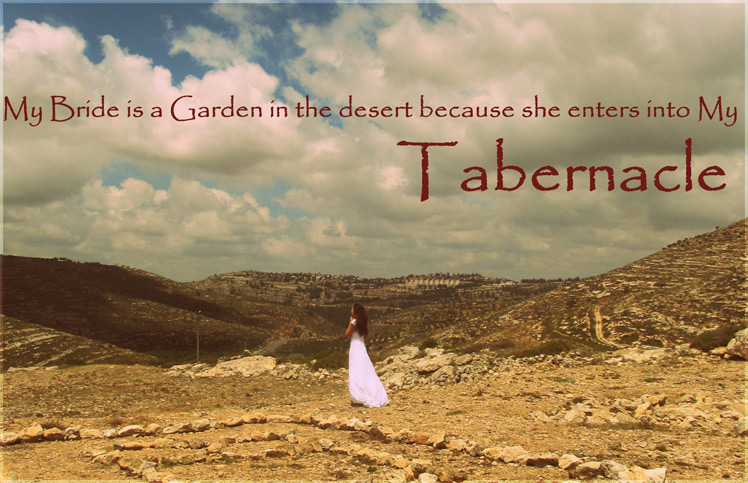 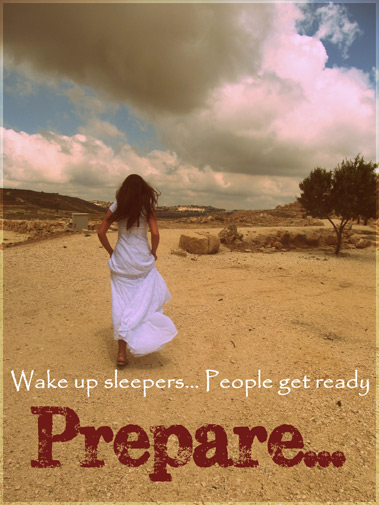 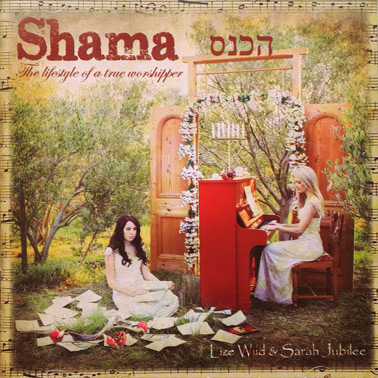